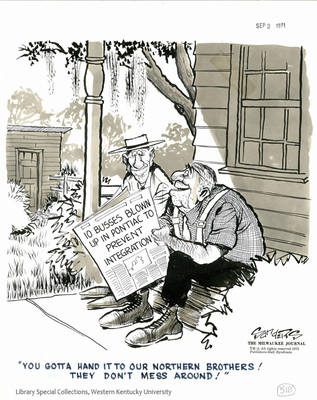 Ordered to integrate in the fall of 1970, the Pontiac, Michigan School Board maintained that school integration “will cause a white flight that will convert the city of Pontiac into a black municipality.” Even so, the board eventually agreed to implement a busing plan that would affect 8,000 of its 24,000 students in the fall of 1971 while its appeal worked its way through the courts. The most dramatic protest to the plan was the bombing of ten school buses on August 30, 1971, one week before the start of the school year. On September 9, the FBI arrested six area Klansmen, eventually convicting five of them on related charges.

The National Action Group (NAG) led the local opposition. Nine of its members were arrested for interfering with the operation of the buses, and 300 picketed the offices of the school board. In other protests, auto workers shut down a GM plant for one day, and a police union made a $300 donation to NAG. On October 27, the U.S. Supreme Court unanimously refused to take up the case.