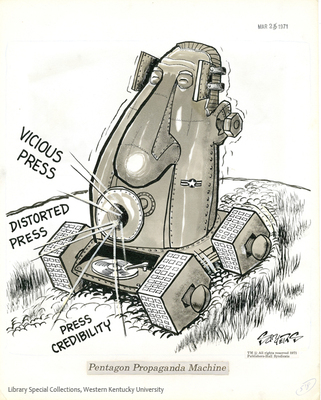 The Nixon Administration had a combative relationship with the press. CBS’s broadcast of The Selling of the Pentagon angered Vice President Agnew when it alleged that the Pentagon spent at least $30 million annually burnishing its public image. Expenditures included $6.5 million for films released to various media outlets and $2 million for press releases. After the documentary aired, he accused the network of knowingly using “error and propagandistic manipulation” and described it as “a subtle but vicious broadside against the nation’s defense establishment.” Agnew also maintained that there was a “widening credibility gap between the national news media and the American public.”