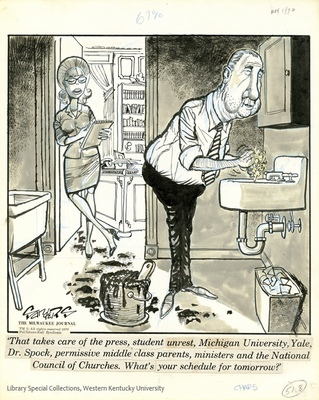 In a speech delivered on April 27, 1970, Vice President Agnew urged universities to adopt a “nine point get tough policy” that included “an end to appeasement” of students, “a clear and concise set of rules for campus conduct,” no negotiations “under threat or coercion.” He also called out the President of Michigan State University for agreeing to increase black student enrollment and blasted the President of Yale for voicing skepticism that eight Black Panthers currently on trial for murder and kidnapping could get a fair trial.

Agnew also took on parenting and the role of religion in family life. He criticized “affluent, permissive, upper-middle-class parents who learned their Dr. Spock and threw discipline out the window when they should have done the opposite.” The Vice President maintained that student protestors were “dropped off by their parents at Sunday School to hear the ‘modern’ gospel from a ‘progressive’ preacher more interested in fighting pollution than fighting evil – one of those pleasant clergymen who lifts his weekly sermons out of old newsletters from a National Council of Churches that has cast morality and theology aside as not ‘relevant” and set as its goal of honor the recognition of Red China and the preservation of the Florida alligator.”