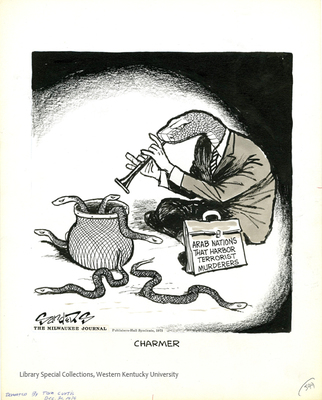 On March 1, 1973, eight members of the Black September Organization took control of the Saudi Arabian embassy in Khartoum, Sudan, during an embassy party. When the Sudanese government did not meet their demands, the terrorists killed the U.S. Ambassador, U.S. Deputy Chief of Mission, and one Belgian consular official. Concerned that a country in the region would grant asylum to the terrorists, President Nixon issued a statement that “the perpetrators of the crime must be brought to justice” and U.S. officials lobbied their counterparts throughout the region. Convicted of murder in June 1974, the hostage takers were flown to Egypt and eventually released to the Palestine Liberation Organization (PLO).