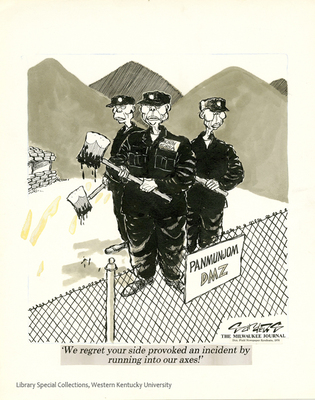 On August 18, 1976, North Korean soldiers attacked a work party of American and South Korean servicemen who were trimming trees in the joint security area known as the demilitarized zone. Two American officers died, and four American and five South Korean soldiers were wounded. In response, the United States increased its military presence in the region and requested a meeting of the Military Armistice Commission. Four days later, North Korean leader Marshall Kim Il Sung released a statement that “it was regretful that an incident occurred” and that an “effort must be made so that such incidents may not recur in the future.” He did not take responsibility for the attack however.

In early September the United Nations command and North Korea reached a four-part agreement designed to lessen the likelihood that such an incident would occur again. It provided for the installation of a cement line 20 inches wide by two inches high marking the demarcation line at the armistice commission’s conference site in Panmunjom. On April 27, 2018, North Korean leader Kim Jong-un and South Korean President Moon Jae-in symbolically stepped over this line twice during a one-day summit meeting. It was the first time a North Korean leader had entered South Korea since the Armistice was signed in 1953.