Uncaptioned cartoon regarding request for tapes 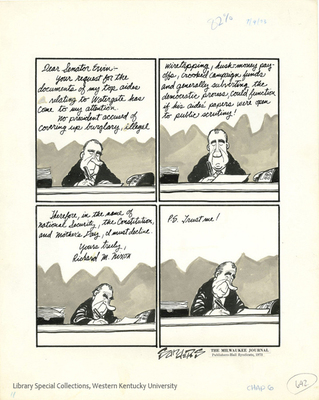 On July 8, 1973, President Richard Nixon sent a letter to Senator Sam Ervin, Jr. (D-NC), the Chair of the Senate Watergate Committee, informing him that for constitutional reasons he would not allow committee members to review his presidential papers or to interview him. Permitting the committee access would “jeopardize the fundamental constitutional role of the Presidency. … No President could function if the private papers of his office, prepared by his personal staff, were open to public scrutiny.”

Nixon cited the separation of powers doctrine as the basis for his refusal to testify before the Watergate Committee. “The pending requests, however, would move us from proper presidential cooperation with a Senate committee to jeopardizing the fundamental constitutional role of the Presidency. … The White House staff will continue to cooperate fully with the committee in furthering information relevant to its investigation except in those instances where I determine that meeting the committee’s demands would violate my constitutional responsibility to defend the office of the Presidency against encroachment by other branches.”