“Welcome to the slow learner’s club.” 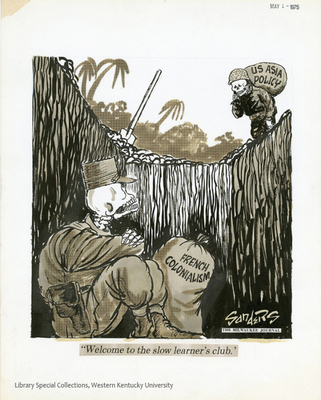 This cartoon bookends the withdrawal of French forces from Indochina in 1954 with the fall of Saigon 31 years later. The fall of the fortress of Dien Bien Phu to the Vietminh (North Vietnamese) following a 57-day siege led France to withdraw from Vietnam in 1954. Notably, President Eisenhower’s refusal to sign a conference declaration that divided Indochina into North and South regions foreshadowed America’s growing involvement in the region.

Twenty-one years later, the Vietcong surged into Saigon after the South Vietnamese government surrendered on April 30, 1975. It took 19 hours for helicopters to transport nearly 1,000 Americans and several thousand Vietnamese to American ships. Four Marines were killed during the evacuation, marking the end of U.S. involvement in a war that drew 500,000 American service personnel and resulted in 52,000 deaths. In his official statement, President Ford noted that the fall of Saigon “closes a chapter in the American experience.”