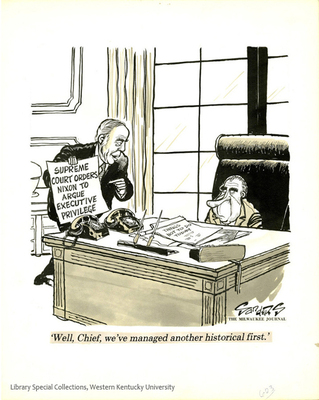 On May 30, 1974, the U.S. Supreme Court heard oral arguments on granting a petition for an expedited review of whether the Nixon Administration must turn over 64 tapes of conversations in the Oval Office. Earlier that month, Judge John J. Sirica had ordered their release for possible use in the upcoming Watergate coverup trial of seven former Nixon Administration officials, including H. R. Haldeman, John D. Ehrlichman, and former Attorney General John Mitchell.

During oral arguments, Nixon’s attorney, James D. St. Clair, argued “for a thorough and carefully considered review of the substantial constitutional issues involved in this litigation.” Meanwhile, Watergate Special Prosecutor Leon Jaworski argued that release of the tapes was necessary because “this nation’s constitutional form of government is in serious jeopardy if the President, any President, is to say that the Constitution means what he says it does, and that there is no one, not even the Supreme Court, to tell him otherwise.”

On May 31, 1974, the Supreme Court in a four-sentence order agreed to hear the case, the first time the Justices had accepted a case that bypassed the Appeals Court since the Truman administration. On July 24, it issued a unanimous 7-0 decision (Associate Justice William Rehnquist had recused himself) that the Nixon Administration must turn over the tapes.