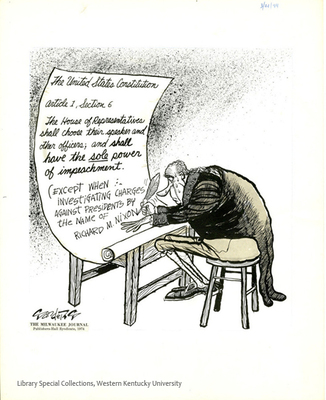 In March 1974, President Nixon’s attorney, James D. St. Clair, asked to participate in hearings of the House Judiciary Committee with the power to review evidence and call and cross-examine witnesses. Would granting this request turn the hearings into a Constitutional trial? The Committee initially divided along party lines, but in April the Democrats agreed to allow the President’s Counsel to “sit in on the initial sessions at which members will be given an overview of the allegations against Mr. Nixon and the evidence to support or refute those allegations.” The compromise lost importance when the U.S. Supreme Court ruled on July 24 that Nixon must turn over 64 tapes of conversations with his aides to U.S. District Court Judge John J. Sirica. Sixteen days later, he resigned.