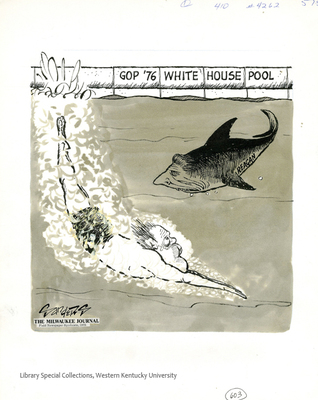 American presidents running for re-election often have an easy path to their party’s nomination. Not so President Gerald Ford, who was forced to fend off a challenge from Ronald Reagan, the former governor of California. Announcing his entrance into the race on November 20, 1975, Reagan ran as an outsider, proclaiming that “Our nation’s capital has become the seat of a buddy system that functions for its own benefits – increasingly insensitive to the needs of the American worker who supports it with his taxes.” He also pledged that he would not engage in personal attacks on the incumbent. “I’m going to abide by the 11th Commandment: Thou shall not speak ill of another Republican.” The Ford presidential campaign responded that Reagan’s appeal was “much too narrow even within the Republican Party” and that any of the Democratic contenders would defeat him in the general election. President Ford narrowly won his party’s nomination on the first ballot but lost the election to the Democratic nominee, Jimmy Carter.