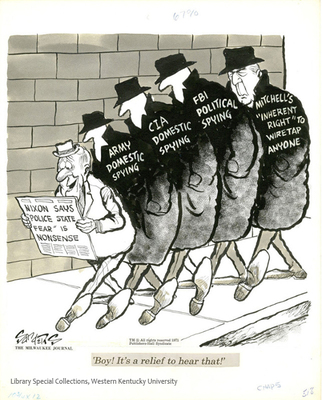 During the Spring of 1971, the Nixon Administration’s policy on domestic wiretapping was challenged. Attorney General John Mitchell’s argued that wiretaps “to protect the nation from attempts of domestic organizations to attack and subvert the existing structure of government” without a court-issued warrant were permissible. On June 8, the U.S. Court of Appeals for the Sixth Circuit ruled against his position. Later that month, Rep. Emanuel Celler (D-NY) publicly expressed his concern that the United States was “heading toward a police state.”

In response, President Nixon declared that the United States “isn’t a police state and it isn’t going to become one.” He maintained that the number of wiretaps carried out during his administration were half of those carried out between 1961 and 1963 and characterized the concern over domestic wiretapping as hysteria and political demagoguery.

A copy of this cartoon is part of the records of the U.S. Central Intelligence Agency (CIA).