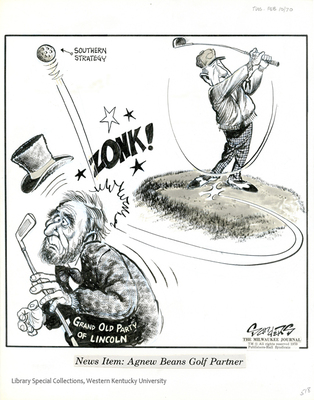 This cartoon links an episode at the 1970 Bob Hope Desert Golf Classic, in which Vice President Agnew hit his playing partner with a golf ball, to the effect President Nixon’s “Southern strategy” was having on the Republican Party. Many experts maintained that to break up FDR’s coalition of northern and southern Democrats, the “Party of Lincoln” had abandoned the interests of its moderate, northeastern wing in favor of emphasizing issues such as local control, law and order, and fear of black Americans.

Known for his tough, often biting speeches, Vice President Agnew maintained that there was no “Southern strategy.” Instead, he noted that the Republican Party was “writing the south [sic] back into the Union again by using an even hand and a fair approach rather than writing the south [sic] off like the Democrats are doing.” He declared that the charge of a “southern strategy” [sic] was “composed of 50 per cent politics and 50 percent sour grapes. … For the first time in a century the Republican Party is a force in the south, [sic] and it is a force for good.”