‘Listen, my good woman! Even with these record high food prices you housewives have it better than most people in the world!’ 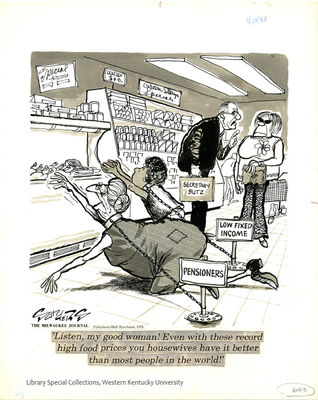 In 1973 rising prices and inflation hammered American consumers. Foreign demand for US grain was soaring, and in July of that year the U.S. Department of Agriculture lowered crop production estimates. Even so, the Nixon Administration planned to remove existing export controls on soy beans later that year and to refrain from placing new controls on other grains and foodstuffs. It acknowledged that this would lead to higher food prices but maintained that this was necessary for U.S. trade policy. In early August the USDA estimated that the price of food for the year would increase between 18 and 22% over that of 1972.