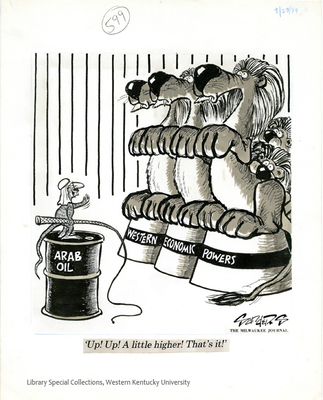 In September 1974, the six-month-long OPEC oil embargo had only recently ended and the oil producing countries seemingly had the upper hand. President Ford noted that “exorbitant prices can only distort the world economy, run the risk of worldwide depression, and threaten the breakdown of world order and safety.” Secretary of State Henry Kissinger was even more direct: “…the world cannot sustain even the present level of prices, much less continuing increases. … What has gone up by political decision can be reduced by political decision.”

The response from oil producing countries was largely negative. “The establishment of [OPEC] was a direct consequence of the developed countries’ use of a policy of outrageously low prices for our raw materials as a weapon of economic oppression.” A headline in one Lebanese newspaper read “Ford Threatens to Seize Arab Oil by Force of Arms,” and the President of Venezuela linked the world food crisis to “the high prices at which the developed nations sell us agricultural and industrial machinery.”