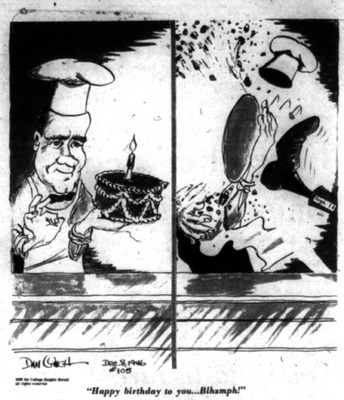 Dan Lynch was born in Fort Wayne and raised in a region of northwestern Indiana known as the “Calumet Region.” Like any born cartoonist, Dan drew all of the time on everything—all through grade school. At Bishop Noll High School, in The Warrior student newspaper, his first cartoon for them was deemed “too controversial” for publication. Lynch was off to a good start.

After graduation, Lynch studied journalism at Western Kentucky University in Bowling Green. In 1968, Lynch’s interest shifted to cartooning, and led him to join the staff of Indiana University’s Indiana Daily Student as staff cartoonist in 1972. He stalked the halls of Ernie Pyle Hall slinging his ink until he left IU in 1975 to join The Journal-Gazette in Fort Wayne, upon the recommendation of Bill Sanders, the cartoonist for The Milwaukee Journal.

Lynch moved to The Kansas City Star in 1978, but returned to The Journal Gazette three years later. Lynch told the website Indiana Cartoonist (www.indianacartoonist.com), “The Star was a great newspaper and a fabulous experience, but Kansas City wasn’t home and I knew it would never be. When my old job opened up, I couldn’t resist going back.”

For eleven years, beginning in 1986, Lynch’s work was nationally syndicated by NEA (Newspaper Enterprise Association). Lynch retired from syndication in 1997 to again concentrate on local and state issues. Many readers prefer local topics to cartoons that don’t pertain to the local living experience. Lynch’s cartoons frequently annoyed readers, but that was evidence to Lynch that he was doing his job. . . .

After the events of September 11, 2001, Lynch added his commentary on the event by reflecting back to December of 1941 and FDR’s reaction to that era’s sneak attack upon our sphere of influence.

Two weeks after 9-11, Lynch’s 25 year career of bringing humor and poignant insight to world events was stilled by a serious stroke, which sadly led to his retirement from the newspaper industry. He died in 2014.

[Summers, Michael. Comics in the Fort]