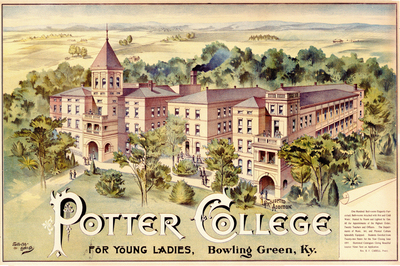 In the late 1880s the Reverend B.F. Cabell, head of the Cedar Bluff Female College in Warren County, decided to move to Bowling Green and establish a college there. Pleasant J. Potter was the major subscriber to the stock of new enterprise, and when it opened on September 9, 1889, the Potter College for Young Ladies carried his name. The college was located on Vinegar Hill clearing of about seven acres that looked toward downtown Bowling Green. Included near the back of the site was one of the Civil War forts built by the Confederates in late 1861 and later occupied by Federal troops. Cabell built a large two-story house of local white stone west of the large three-story brick structure that contained both academic and living facilities for the students. Potter College opened with eleven faculty members and two hundred students who came from thirteen states. The curricula ran heavily to genteel subjects suitable to young ladies - music received considerable emphasis - but there were a few commercial classes. For several years Potter College enjoyed a fine reputation that attracted students from as many as thirty states. Then growth of public colleges cut into its enrollment, and a prolonged illness left President Cabell unable to provide the guidance he had given during the college's first years. The school closed in 1909, and the property was sold to the State Normal School [Western Kentucky University].