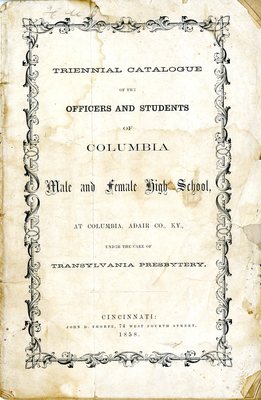 This is a mixed School. Providence has not so ordered the affairs of the human race that one family or one community should raise females and another males. But brothers and sisters are raised up in the same family; males and females constitute every good community: and the mutual influence of the sexes upon each other is necessary to the highest development and happiness of the family, and society at large.

So, the reason of the thing and the analogy of nature seem clearly to indicate that, God never designed that those whom he has united in the family and the community, should be separated in the school. What reason and nature thus teach has been demonstrated by experiment. Mixed schools, under rigid discipline, directed by watchfulness, prudence, and foresight, have resulted in the happiest effects to both sexes. Having tried both plans, we can give positive testimony to the fact, that in mixed schools, where the sexes recite together, they are much more easily managed, cultivate better morals and manners, and are much better students than when separated. Our grounds and school rooms are so arranged that the male and female departments are entirely separated, only when they are called to recitation by a large bell, except the little boys and girls in the primary department, who occupy the same room.

Read more from the Triennial Catalogue of the Officers and Students of Columbia Male & Female High School.