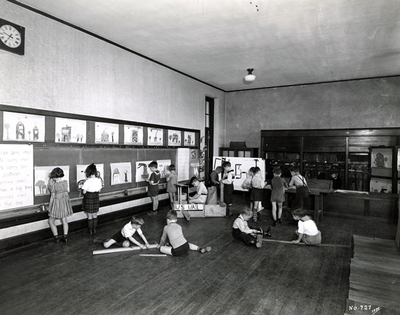 This image shows the kindergarten class in 1939.

The WKU training school opened in 1906 and consisted of 1st through 4th grades to give normal school students a place to get practical experience and allow professors to critique their work.

In 1912 the curriculum was expanded to include grades five to eight. One year of high school was added in 1920. The training school building currently called College High Building was built in 1925 and the school became a K-12 facility.

In 1964 the high school was renamed College High and came under the direction of the WKU College of Education. It became University High in 1966 when the Western obtained university status. The school closed in 1970 and the training school children were absorbed into the Jones-Jaggers Laboratory School.