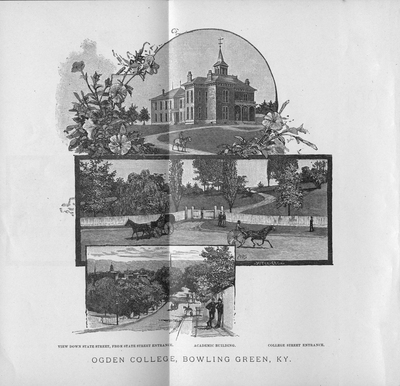 Robert Wenn Ogden, born 1796 in Loudon County, Virginia moved to Warren County, Kentucky in 1815 and built his farm, Walnut Grove. Having no children, Ogden made provisions to establish a school in his name after his death. He set up a regent and a board of no more than five trustees to use $50,000 to create, endow and run Ogden College. Tuition scholarships were to be provided for white Warren County and Kentucky males. Robert Ogden died November 10, 1873 and his executor Hector Loving became the first regent of the school.

Under the provisions of Robert Ogden's will Hector Loving named trustees and his own successor in 1874. Ogden College opened September 3, 1877 with President James Wightman presiding. A charter was obtained from the state legislature on March 8, 1878. The school was located on Thomas Calvert's farm in a building originally used by Warren College. In 1923 Perry Snell pledge $20,000 for the construction of Snell Hall which had an estimated cost of $50,000.

The original curriculum consisted of a two-year preparatory course and a four-year college course. This varied over time. Accreditation was an ongoing issue. The largest enrollment was 162 students in 1918. The school was served by ten presidents the last several acting as faculty chairs.

In November 1927 Regent R.C.P. Thomas leased Ogden College campus, which consisted of three buildings on seven acres and a 140 acre farm, to Western Kentucky State Normal School & Teachers College for a period of 20 years to begin January 1, 1928. Ogden College was to be named Ogden Department of Science with proceeds from the endowment to support the department. Student records were transferred to the custody of Western. This was effectively the end of Ogden College.