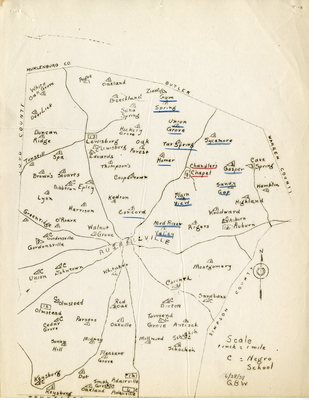 Map of Logan County, Kentucky one room schools in 1938 by G. B. Williams, superintendent of Logan County schools. This map was sent to Mark Goodman of the Kentucky Department of Education in a bid to accredit Chandler's Chapel High School in a letter dated October 21, 1940.

"This high school has an active enrollment of 56 at this time; however I believe this school should be permitted to operate for a few more years with the expectation that it meet accrediting requirements as the elementary enrollment, which is 152 for six grades, progresses to high school. You will notice that the seventh and eighth grad enrollment is 48.

You will also notice from the map that this school serves fully one fifth of the entire county, which is almost 130 square miles, and also draws from the following one room schools, Mud River Valley, Concord, Plain View, Homer, Tar Spring, Union Dale, Gum Spring, Sycamore, Sandy Gap, and the two room school of Gasper (Bucksville). All eight grades are taught in these schools with the exception of Gasper where only six grades are taught. Furthermore, these rural schools are not directly accessible from any other consolidated centers.

I am sure you will keep in mind that this high school was established in 1936 and has not had an opportunity to reach its rightful high school enrollment. It was established in the center of a district that was previously served by the Homer High School, some miles west of the present site, and later by Gasper High School (Bucksville) on the extreme eastern side of the district.

In order to make a consolidation with one of the other high schools, pupils would either go to Lewisburg, Russellville, or Auburn; however Russellville is an independent system. The distance from Chandler's Chapel to Lewisburg is almost 22 miles one way and the distance to Auburn is 12 miles one way. It would require the students living near the present school building to travel by bus a total of 24 miles in one school day if they went to Auburn and 44 miles if they went to Lewisburg.

The original building of eight class rooms and a gymnasium has been supplemented by the addition of three class rooms for the large elementary enrollment and two basement classrooms have been abandoned as undesirable. This building was constructed in 1936. It affords an excellent agriculture department. They have a total of four high school teachers and five elementary teachers. Your records will reveal that the enrollment has been steadily increasing. With the increase of rural highways, considerable consolidation will be possible. The present school is served by three buses."