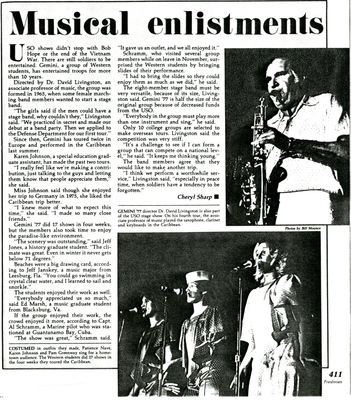 Article regarding Gemini '77 that appeared in the 1978 Talisman yearbook:

USO shows didn't stop with Bob Hope or the end of the Vietnam War. There are still soldiers to be entertained. Gemini, a group of Western students, has entertained troops for more than 10 years.

Directed by Dr. David Livingston, an associate professor of music, the group was formed in 1965, when some female marching band members wanted to start a stage band.

"The girls said if the men could have a stage band, why couldn't they," Livingston said. "We practiced in secret and made our debut at a band party. Then we applied to the Defense Department for our first tour."

Since then, Gemini has toured twice in Europe and performed in the Caribbean last summer.

Karen Johnson, a special education graduate assistant, has made the past two tours.

"I really feel like we're making a contribution, just talking to the guys and letting them know that people appreciate them," she said.

Miss Johnson said though she enjoyed her trip to Germany in 1975, she liked the Caribbean trip better.

"I knew more of what to expect this time," she said. "I made so many close friends."

Gemini '77 did 17 shows in four weeks, but the members also took time to enjoy the paradise-like environment.

The scenery was outstanding," said Jeff Jones, a history graduate student. "The climate was great. Even in winter it never gets below 71 degrees."

Beaches were a big drawing card, according to Jeff Janskey, a music major from Leesburg, Fla. "You could go swimming in crystal clear water, and I learned to sail and snorkle."

The students enjoyed their work as well.

"Everybody appreciated us so much," said Ed Marsh, a music graduate student from Blacksburg, Va.

If the group enjoyed their work, the crowd enjoyed it more, according to Capt. Al Schramm, a Marine pilot who was stationed at Guantanamo Bay, Cuba.

"The show was great," Schramm said. "It gave us an outlet, and we all enjoyed it."

Schramm, who visited several group members while on leave in November, surprised the Western students by bringing slides of their performance.

"I had to bring the slides so they could enjoy them as much as we did," he said.

The eight-member stage band must be very versatile, because of its size, Livingston said. Gemini '77 is half the size of the original group because of decreased funds from the USO.

"Everybody in the group must play more than one instrument and sing," he said.

Only 10 college groups are selected to make overseas tours. Livingston said the competition was very stiff.

"It's a challenge to see if I can form a group that can compete on a national level, he said. "It keeps me thinking young."

The band members agree that they would like to make another trip.

"I think we perform a worthwhile service," Livingston said, "especially in peace time, when soldiers have a tendency to be forgotten."

Gemini '77 director Dr. David Livingston is also part of the USO stage show. On his fourth tour, the associate professor of music played the saxophone, clarinet and keyboards in the Caribbean.

Costumed in outfits they made, Patience Nave, Karen Johnson and Pam Greenway sing for a hometown audience. The Western students did 17 shows in the four weeks they toured the Caribbean.