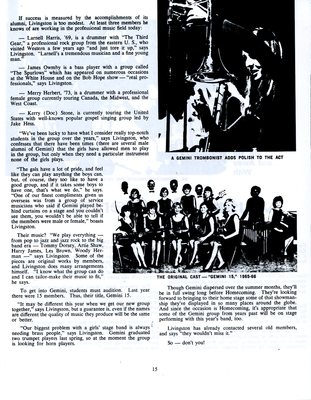 Conclusion of the Music, By Gemini! article:

If success is measured by the accomplishments of its alumni, Livingston is too modest. At least three members he knows of are working in the professional music field today:

"We've been lucky to have what I consider really top-notch students in the group over the years," says Livingston, who confesses that there have been times (there are several male alumni of Gemini) that the girls have allowed men to play in the group, but only when they need a particular instrument none of the girls plays.

"The gals have a lot of pride, and feel like they can play anything the boys can, but, of course, they too like to have a good group, and if it takes some boys to have one, that's what we do," he says. "One of our finest compliments given us overseas was from a group of service musicians who said if Gemini played behind curtains on a stage and you couldn't see them, you wouldn't be able to tell if the members were male or female," boats Livingston.

Their music? "We play everything - from pop to jazz and jazz rock to the big band era - Tommy Dorsey, Artie Shaw, Harry James, Les Brown, Woody Herman - " says Livingston. Some of the pieces are original works by members and Livingston does many arrangements himself. "I know what the group can do and I can tailor-make their music to fit," he says.

To get into Gemini, students must audition. Last year there were 15 members. Thus, their title, Gemini 15.

"It may be different this year when we get our new group together," says Livingston, but a guarantee is, even if the names are different the quality of music they produce will be the same or better.

"Our biggest problem with a girls' stage band is always needing brass people," says Livingston. Gemini graduated two trumpet players last spring, so at the moment the group is looking for horn players.

Though Gemini dispersed over the summer months, they'll be in full swing long before Homecoming. They're looking forward to bringing to their home stage some of that showmanship they've displayed in so many places around the globe. And since the occasion is Homecoming, it's appropriate that some of the Gemini group from past years will be on stage performing with this year's band, too.

Livingston has already contacted several old members, and says "they wouldn't miss it."