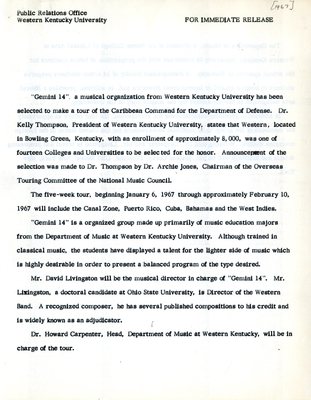 "Gemini 14," a musical organization from Western Kentucky University has been selected to make a tour of the Caribbean Command for the Department of Defense. Dr. Kelly Thompson, President of Western Kentucky University, states that Western, located in Bowling Green, Kentucky, with an enrollment of approximately 8,000, was one of fourteen Colleges and Universities to be selected for the honor. Announcement of the selection was made to Dr. Thompson by Dr. Archie Jones, Chairman of the Overseas Touring Committee of the National Music Council.

The five-week tour, beginning January 6, 1967 through approximately February 10, 1967 will include the Canal Zone, Puerto Rico, Cuba, Bahamas and the West Indies.

"Gemini 14" is a organized group made up primarily of music education majors from the Department of Music at Western Kentucky University. Although trained in classical music, the students have displayed a talent for the lighter side of music which is highly desirable in order to present a balanced program of the type desired.

Mr. David Livingston will be the musical director in charge of "Gemini 14." Mr. Livingston, a doctoral candidate at Ohio State University, is Director of the Western Band. A recognized composer, he has several published compositions to his credit and is widely known as an adjudicator.

Dr. Howard Carpenter, Head, Department of Music at Western Kentucky, will be in charge of the tour.