Her Highness: Queen to Represent Minorities 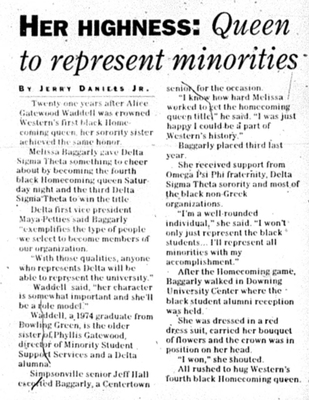 "With those qualities, anyone who represents Delta will be able to represent the university."

Waddell said, "her character is somewhat important and she'll be a role model."

Waddell, a 1974 graduate from Bowling Green, is the older sister of Phyllis Gatewood, director of Minority Student Support Services and a Delta alumna.

"I know how hard Melissa worked to get the homecoming queen title," he said. "I was just happy I could be a part of Western's history."

She received support from Omega Psi Phi fraternity, Delta Sigma Theta sorority and most of the black non-Greek organizations.

"I'm a well-rounded individual," she said. "I won't only just represent the black students . . . I'll represent all minorities with my accomplishment."

After the Homecoming game, Baggarly walked in Downing University Center where the black student alumni reception was held.

She was dressed in a red dress suit, carried her bouquet of flowers and the crown was in position on her head.