Will SGA Crown Itself Queen? 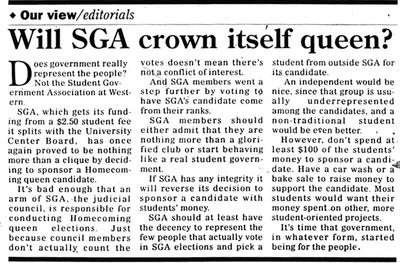 Does government really represent the people? Not he Student Government Association at Western.

SGA, which gets its funding from a $2.50 student fee it splits with the University Center Board, has once again proved to be nothing more than a clique by deciding to sponsor a Homecoming queen candidate.

It's bad enough that an arm of SGA, the judicial council, is responsible for conducting Homecoming queen elections. Just because council members don't actually count the votes doesn't mean there's not a conflict of interest.

And SGA members went at step further by voting to have SGA's candidate come from their ranks.

SGA members should either admit that they are nothing more than a glorified club or start behaving like a real student government.

If SGA has any integrity it will reverse its decision to sponsor a candidate with students' money.

SGA should at least have the decency to represent the few people that actually vote in SGA elections and pick a student from outside SGA for its candidate.

An independent would be nice, since that group is usually underrepresented among the candidates, and a non-traditional student would be even better.

However, don't spend at least $100 of the students' money to sponsor a candidate. Have a car wash or a bake sale to raise money to support the candidate. Most students would want their money spent on other, more student-oriented projects.

It's time that government, in whatever form, started being for the people.