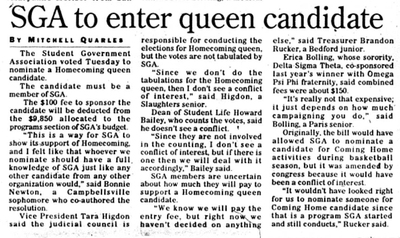 The candidate must be a member of SGA.

The $100 fee to sponsor the candidate will be deducted from the $9,850 allocated to the programs section of SGA's budget.

"This is a way for SGA to show its support of Homecoming, and I felt like that whoever we nominate should have a full knowledge of SGA just like any other candidate from any other organization would," said Bonnie Newton, a Campbellsville sophomore who co-authored the resolution.

Vice President Tara Higdon said the judicial council is responsible for conducting the elections for Homecoming queen, but the votes are not tabulated by SGA.

"Since we don't do the tabulations for the Homecoming queen, then I don't see a conflict of interest," said Higdon, a Slaughters senior.

Dean of Student Life Howard Bailey, who counts the votes said he doesn't see a conflict.

"Since they are not involved in the counting, I don't see a conflict of interest, but if there is one then we will deal with it accordingly," Bailey said.

SGA members are uncertain about how much they will pay to support a Homecoming queen candidate.

"We know we will pay the entry fee, but right now we haven't decided on anything else," said Treasurer Brandon Rucker, a Bedford junior.

"It's really not that expensive; it just depends on how much campaigning you do," said Bolling, a Paris senior.

Originally the bill would have allowed SGA to nominate a candidate for Coming Home activities during basketball season, but it was amended by congress because it would have been a conflict of interest.

"It wouldn't have looked right for us to nominate someone for Coming Home candidate since that is a program SGA started and still conducts," Rucker said.