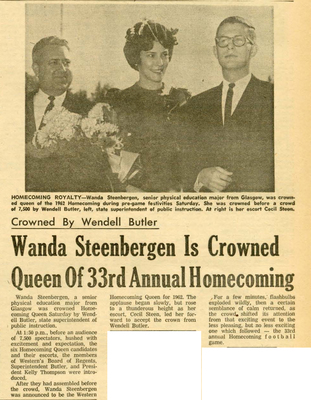 At 1:50 p.m. before an audience of 7,500 spectators, hushed with excitement and expectation, the six Homecoming Queen candidates and their escorts, the members of Western's Board of Regents, Superintendent Butler, and President Kelly Thompson were introduced.

After they had assembled before the crowd, Wanda Steenbergen was announced to be the Western Homecoming Queen for 1962. The applause began slowly, but rose to a thunderous height as her escort, Cecil Steen, led her forward to accept the crown from Wendell Butler.

For a few minutes, flashbulbs exploded wildly, then a certain semblance of calm returned as the crowd shifted its attention from that exciting event to the less pleasing, but no less exciting one which followed - the 33rd annual Homecoming football game.