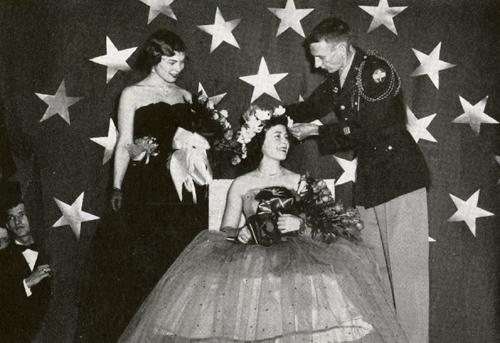 A capacity crowd danced to the music of the Owen Bradley Orchestra and at 10:30 p.m., watched as Dianne Howard, senior physical education major from Caneyville and present ROTC Battle Group sponsor, was crowned Queen of the 29th Annual Military Ball last Friday night.

Cadet Lt. Col. Lynn Bowles, battle group commander, led Miss Howard through an archway of gleaming sabers, formed by the Scabbard and Blade saber team, to her throne in the main lounge of the Paul L. Garrett Student Center, where he placed the crown upon her head and then led the 1963 Military Ball Queen in the traditional Queen's Waltz.

Comprising the Queen's court were the ROTC company sponsors and the sponsors of the Pershing Rifles and Scabbard and Blade. Cadet Major Tom Dunn, acting as Master of Ceremonies, announced each sponsor and her escort as they walked through the saber arch to the Queen's throne.

Crown bearer for this year's Military Ball was 8-year-old Ronnah Childress, a third grader at the Training School. Ronnah is the daughter of Mr. and Mrs. Buddy A. Childress of Bowling Green. Mr. Childress is employed at Western's Business Office.