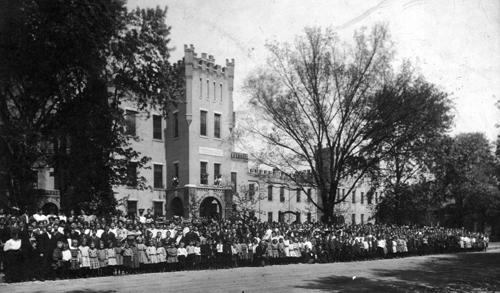 Upon the creation of WKU in 1906 the business section of the Southern Normal School became the Bowling Green Business University. It remained in operation in downtown Bowling Green until 1963 when it merged back with WKU as the College of Commerce. The yearbook for the BGBU was called the Towers. As you can see from the photo, the school resembled a castle with towers. Here is a list of the known women who were named Miss Towers. If you are aware of others not herein named, please contact us at archives@wku.edu.
1940 Mary Huston of Senatobia, MS
1941 Nancy Handley
1942 Velma Janzen
1943-1945 no yearbooks due to World War II
1946 Evans Cooner
1947 Elizabeth White
1948 Jean Reddick
1950 Beth Francis
1951 Merial Ingram
1952 Mary King
1953 Norma Farley of Princeton, WV
1954 Betty Rosenblatt of Hawesville, KY
1955 Mickell Kraus
1956 Ann Vantrease of Gallatin, TN
1957 Cary Hevia of Havana, Cuba
1958 Jane Copeland of Livingston, TN
1959 Glenda Cobb of Bowling Green, KY
1960 Linda Baskett
1961 Muriel Wright of Russellville, KY
1963 Mary Moore of Lawrenceburg, TN
Printing is not supported at the primary Gallery Thumbnail page. Please first navigate to a specific Image before printing.