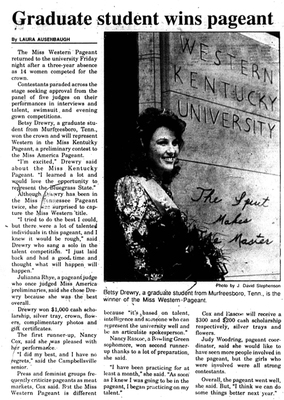 Article from the College Heights Herald:

The Miss Western Pageant returned to the university Friday night after a three-year absence as 14 women competed for the crown.

Contestants paraded across the stage seeking approval of five judges on their performances in interviews and talent, swimsuit and evening gown competition.

Betsy Drewry, a graduate student from Murfreesboro, Tenn., won the crown and will represent Western in the Miss Kentucky Pageant, a preliminary contest to the Miss America Pageant.

“I’m excited,” Drewry said about the Miss Kentucky Pageant. “I learned a lot and would love the opportunity to represent the Bluegrass State.”

Although Drewry has been in the Miss Tennessee pageant twice, she was surprised to capture the Miss Western title.

“I tried to do the best I could, but there were a lot of talented individuals in this pageant, and I knew it would be rugh,” said Drewry who sang a solo in the talent competition. “I just laid back and had a good time and though what will happen will happen.”

Julianna Rhye, a pageant judge who once judged Miss America preliminaries, said she chose Drewry because she was the best overall.

The first runner-up, Nancy Cox, said she was pleased with her performance.

“I did my best, and I have no regrets,” said the Campbellsville senior.

Press and feminist groups frequently criticize pageants as meat markets, Cox said. But the Miss Western Pageant is different because “it’s based on talent, intelligence and someone who can represent the university well and be an articulate spokesperson.”

Nancy Rascoe, a Bowling Green sophomore, won second runner-up thanks to a lot of preparation, she said.

“I have been practicing for at least a month,” she said. “As soon as I knew I was going to be in the pageant, I began practicing on my talent.”

Cox and Rascoe will receive a $300 and $200 cash scholarship respectively, silver trays and flowers.

Judy Woodring, pageant coordinator, said she would like to have seen more people involved in the pageant, but the girls who were involved were all strong contestants.

Overall, the pageant went well, she said. But, “I think we can do some things better next year.”