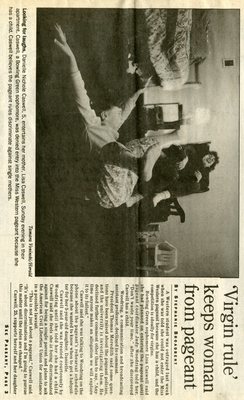 College Heights Herald article regarding student being banned from Miss Western pageant because she had a child:

A Western student was outraged last week when she was told she could not enter the Miss Western pageant because she has a child, and the competition is ideally for virgins.

Bowling Green sophomore Lisa Caswell said she had planned on entering the pageant until pageant coordinator Judy Woodring told her, "Don't waste your time," after she discovered Caswell has a child.

Woodring, a communication and broadcasting assistant professor declined to comment.

President Thomas Meredith said some questions have been raised about the pageant policies, and the university is investigating them. He declined further comment other than to say, "Anytime anyone makes an allegation we will explore it to its fullest."

Caswell said she was talking to Woodring on the phone about the pageant's rehearsal schedule because she wanted to known when to get a babysitter for her 5-year-old daughter, Danielle.

Caswell said she was treated courteously by Woodring until she told her she had a child. Caswell said she feels she is being discriminated against for being a single parent and plans to ask the American Civil Liberties Union for assistance in a possible lawsuit.

"This is not just about a pageant," Caswell said. "It's about discrimination and I'm going to pursue this matter until the rules are changed."

Caswell, 25, supports herself and her daughter and wanted to enter the pageant on March 10 for the $1,000 scholarship that goes to the winner.

"I feel like I'm being penalized for being a single parent," Caswell said.

"I feel that I could handle both responsibilities," Caswell said. "They've violated my freedom to make my own decisions."

The woman named as Miss Western goes on to compete in the Miss Kentucky pageant, where a representative is chosen for the Miss America pageant.

Western signs a contract with the Miss America pageant and agrees to follow all of the rules and stipulations it issues. The university must agree to abide by the standards if they hold the pageant.

The Herald tried to obtain a copy of the Miss America pageant rules from its national headquarters last night. There was no response.

Caswell hopes the university will take some action regarding the rules of the pageant.

"Western should recognize this as discrimination and refuse to hold the pageant," she said.

Caswell said she will pursue the matter until she is given an acceptable reason for being turned away or until the rules are changed.