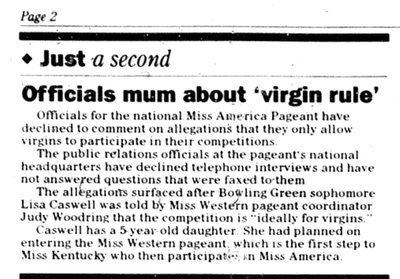 Officials for the national Miss America Pageant have declined to comment on allegations that they only allow virgins to participate in their competitions.

The public relations officials at the pageant's national headquarters have declined telephone interviews and have not answered questions that were faxed to them.

The allegations surfaced after Bowling Green sophomore Lisa Caswell was told by Miss Western pageant coordinator Judy Woodring that the competition is "ideally for virgins."

Caswell has a 5-year-old daughter. She had planned on entering the Miss Western pageant, which is the first step to Miss Kentucky who then participates in Miss America.