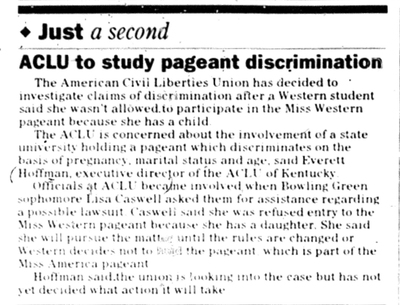 The American Civil Liberties Union has decided to investigate claims of discrimination after a Western student said she wasn't allowed to participate in the Miss Western pageant because she had a child.

The ACLU is concerned about the involvement of a state university holding a pageant which discriminates on the basis of pregnancy, marital status and age, said Everett Hoffman, executive director of the ACLU of Kentucky.

Officials at ACLU became involved when Bowling Green sophomore Lisa Caswell asked them for assistance regarding a possible lawsuit. Caswell said she was refused entry to the Miss Western pageant because she has a daughter. She said she will pursue the matter until the rules are changed or Western decides not to hold the pageant which is part of the Miss America pageant.

Hoffman said the union is looking into the case but has not yet decided what action it will take.