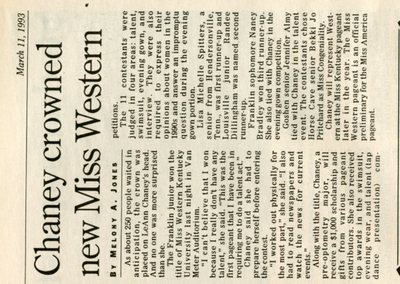 Article from the College Heights Herald:

As about 250 people waited in anticipation, the crown was placed on LeAnn Chaney's head. And no one was more surprised than she.

"I can't believe that I won because I really don't have any talent," she said. "This was the first pageant that I have been in requiring me to do a talent act."

Chaney said she had to prepare herself before entering the contest.

"I worked out physically for the most part," she said. "I also had to read newspapers and watch the news for current events."

Along with the title, Chaney, a pre-optometry major, will receive a $1,000 scholarship and gifts from various pageant contributors. She also received top awards in the swimsuit, evening wear, and talent (tap dance presentation) competitions.

The 11 contestants were judged in four areas: talent, swimsuit, evening gown, and interview. They were also required to express their opinions about women in the 1990s and answer an impromptu question during the evening gown portion.

Chaney will represent Western at the Miss Kentucky pageant later in the year. The Miss Western pageant is an official preliminary for the Miss America pageant.