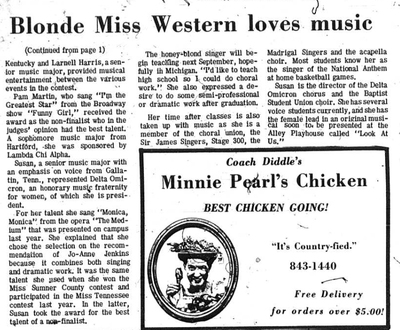 Conclusion of article regarding the 1969 Miss Western pageant.

. . . [Miss] Kentucky and Larnell Harris, a senior music major, provided musical entertainment between the various events in the contest.

Pam Martin, who sang "I'm the Greatest Star" from the Broadway show "Funny Girl," received the award as the non-finalist who in the judges' opinion had the best talent. A sophomore music major from Hartford, she was sponsored by Lambda Chi Alpha.

Susan, a senior music major with an emphasis on voice from Gallatin, Tenn., represented Delta Omicron, an honorary music fraternity for women, of which she is president.

For her talent she sang "Monica, Monica" from the opera "The Medium" that was presented on campus last year. She explained that she chose the selection on the recommendation of Jo-Anne Jenkins because it combines both singing and dramatic work. It was the same talent she used when she won the Miss Sumner County contest and participated in the Miss Tennessee contest last year. In the latter, Susan took the award for the best talent of a non-finalist.

The honey-blond singer will begin teaching next September, hopefully in Michigan. "I'd like to teach high school so I could do choral work." She also expressed a desire to do some semi-professional or dramatic work after graduation.

Her time after classes is also taken up with music as she is a member of the choral union, the Sir James Singers, Stage 300, the Madrigal Singers and the acapella choir. Most students know her as the singer of the National Anthem at home basketball games.

Susan is the director of the Delta Omicron chorus and Baptist Student Union choir. She has several voice students currently, and she has the female lead in an original musical soon to be presented at the Alley Playhouse called "Look at Us."