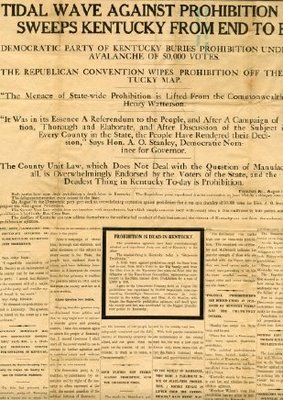 Tidal Wave Against Prohibition Sweeps Kentucky from End to End

Democratic party of Kentucky Buries Prohibition Under Avalanche of 50,000 Votes

The Republican Convention Wipes Prohibition off the Kentucky Map

It was in its Essence a Referendum to the People, and After a Campaign of [Prohibi]tion, Thorough and Elaborate, and After Discussion of the Subject [in] Every County in the State the People Have Rendered their Decision," Says Hon. A.O. Stanley, Democratic Nominee for Governor.

The County Unit Law, which Does Not Deal with the Question of Manufacturing . . . all, is Overwhelmingly Endorsed by the Voters of the State and the Deadest Thing in Kentucky To-day is Prohibition