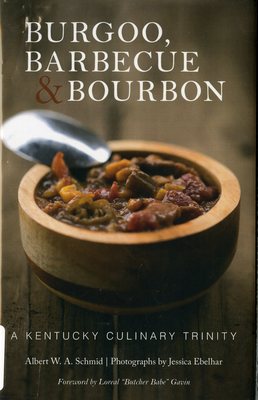 Bourbon is hard to find in Kentucky cookbooks – outside bourbon balls, which seem to be in almost every cookbook. The reason that few cookbooks use bourbon, especially as a beverage, is that many of the counties in Kentucky are still dry. In older texts this translates into very few, if any, bourbon drinks recorded in the literature.

In the fall, fog begins to cover the ground in the early morning. This next recipe is a good change for people who are tired of eggnog. The formula for this drink is listed in many Kentucky-area cookbooks including Festive Firsts, where it is called “Bourbon Fog;” Bellarmine Designers’ Show House Cookbook and The Cincinnati Cook Book, both of which list their recipes under the name “London Fog;” and an ice cream-heavy version in In the Kitchen with Ann called “coffee freeze.”

Combine ingredients in a punch bowl and serve. From Burgoo, Barbecue & Bourbon by Albert Schmid, 2017.