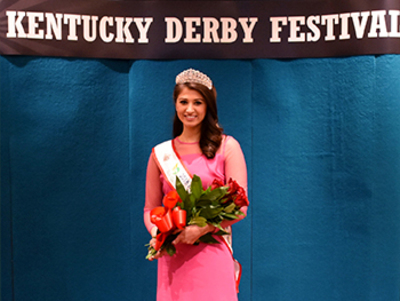 Katie Bouchard, a WKU senior from Owensboro, is among five women selected to serve as Princesses in the 2018 Kentucky Derby Festival Royal Court.

Bouchard, a Social Work major, is a Kentucky Colonel, on the WKU Dean’s List and received the WKU College of Health and Human Services Outstanding Academic Achievement Award. She is the youngest board member of Cinderella’s Closet of Western Kentucky, a charity which provides formal wear to girls who could not otherwise afford to attend prom. Bouchard is also trained in the Kentucky State Dance of clogging.

Bouchard and the other members of the Royal Court were introduced in a ceremony Tuesday (Jan. 9) in Louisville. The Royal Court Program is coordinated by The Fillies, Inc., a volunteer group that works closely with the Festival.

The Princesses will act as ambassadors for the 2018 Kentucky Derby Festival, attending nearly 70 events over a two-week period. They were selected Jan. 6, after attending final judging with 30 other finalist candidates. There were more than 130 original applicants for the Royal Court Program, representing 21 colleges and universities from all over Kentucky, as well as Indiana, Illinois and Alabama. All the applicants went through preliminary judging in November.

Candidates for the Princess Program must maintain a minimum 3.0 grade-point average and are selected by a panel of three out-of-state judges. Criteria for selection includes knowledge of the Derby Festival, poise, intelligence, personality and campus and community involvement.