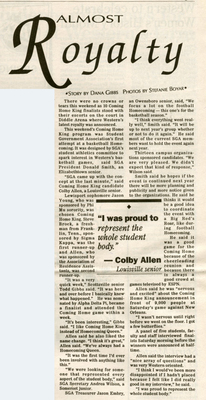 There were no crowns or tears this weekend as 10 Coming Home King finalists stood with their escorts on the court in Diddle Arena where Western's latest royalty was announced.

"SGA came up with the concept at the last minute," said Coming Home King candidate Colby Allen, a Louisville senior.

"It was a very quick week," Scottsville senior Todd Gibbs said. "It was here and over before I basically knew what happened." He was nominated by Alpha Delta Pi, became a finalist and attended the Coming Home game within a week.

"It's been interesting," Gibbs said. "I like Coming Home King instead of Homecoming Queen."

Allen said he also liked the name change. "I think it's great," Allen said. "We've always had a Homecoming Queen.

"It was the first time I'd ever been involved with anything like this."

"We were looking for someone that represented every aspect of the student body," said SGA Secretary Andrea Wilson, a Somerset junior.

SGA Treasurer Jason Embry, an Owensboro senior, said, "We focus a lot on the football Homecoming - this one's for the basketball season."

"I think everything went really well," Smith said. "It will be up to next year's group whether or not to do it again." He said most of the current SGA members want to hold the event again next year.

Smith said he hopes if the event is continued next year that there will be more planning and publicity and more notice given to the organizations. He said he thinks it would be a good idea to coordinate the event with a Big Red's Roar, like during football homecoming.

He said it was a good game for the Coming Home because of the cheerleading reunion and because there is always a good crowd at games televised by ESPN.

Allen said he was "nervous and excited" about the Coming Home King announcement in front of 9,000 people at Saturday's games against New Orleans.

"I wasn't nervous until right before we went on the floor. I got a few butterflies."

A panel of five students, faculty and staff interviewed finalists Saturday morning before the winners were announced at half-time.

Allen said the interview had a "nice array of questions" and was very Western oriented.

"I think I would've been more disappointed if I hadn't placed because I felt like I did really good in my interview," he said.

"I was proud to represent the whole student body."