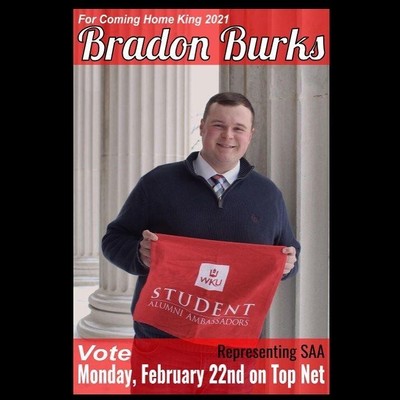 Bradon Burks of Glasgow was crowned WKU's 2021 Coming Home King on Feb. 24. The announcement was live-streamed from Diddle Arena, with all 20 candidates for Coming Home King dressed up in their suits and ties with their dates, all masked up and socially distant.

2020 Homecoming Queen Sarah Harne was there to award the top three finalists.

Bradon is a senior and Agricultural Education and Sales major at WKU and was sponsored by the WKU Student Alumni Ambassadors. he was one of 20 candidates for Coming Home King.

Second runner-up was Reed Breunig of Springfield. He is a junior and healthcare administration major and he was sponsored by Alpha Gamma Delta.