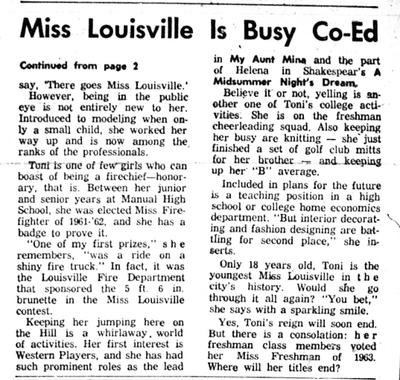 However, being in the public eye is not entirely new to her. Introduced to modeling when only a small child, she worked her way up and is now among the ranks of the professionals.

Toni is one of few girls who can boast of being a firechief - honorary, that is. Between her junior and senior years at Manual high School, she was elected Miss Firefighter of 1961-'62, and she has a badge to prove it.

"One of my first prizes," she remembers, "was a ride on a shiny fire truck." In fact, it was the Louisville Fire Department that sponsored the 5 ft. 6 in. brunette in the Miss Louisville contest.

Keeping her jumping here on the Hill is a whirlaway, world of activities. Her first interest is Western Players, and she has had such prominent roles as the lead in My Aunt Mina and the part of Helena in Shakespeare's A Midsummer Night's Dream.

Believe it or not, yelling is another one of Toni's college activities. She is on the freshmen cheerleading squad. Also keeping her busy are knitting - she's just finished a set of golf club mitts for her brother - and keeping up her "B" average.

Included in plans for the future is a teaching position in a high school or college home economics department. "But interior decorating and fashion designing are battling for second place," she inserts.

Only 18 years old, Toni is the youngest Miss Louisville in the city's history. Would she go through it all again? "You bet," she says with a sparkling smile.

Yes, Toni's reign will soon end. But there is a consolation: her freshman class members voted her Miss Freshman of 1963. Where will her titles end?