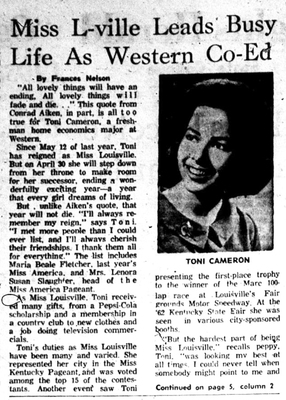 Since May 12 of last year, Toni has reigned as Miss Louisville. But on April 30 she will step down from her throne to make room for her successor, ending a wonderfully exciting year - a year that every girl dreams of living.

But, unlike Aiken's quote, that year will not die. "I'll always remember my reign," says Toni. "I met more people that I could every list, and I'll always cherish their friendships. I thank them all for everything." The list includes Maria Beale Fletcher, last year's Miss America, and Mrs. Lenora Susan Slaughter, head of the Miss America Pageant.

As Miss Louisville, Toni received many gifts, from a Pepsi-Cola scholarship and a membership in a country club to new clothes and a job doing television commercials.

Toni's duties as Miss Louisville have been many and varied. She represented her city in the Miss Kentucky Pageant, and was voted among the top 15 of the contestants. Another event saw Toni presenting the first-place trophy to the winner of the Marc 100-lap race at Louisville's Fair grounds Motor Speedway. At the '62 Kentucky State Fair she was seen in various city-sponsored booths.

"But the hardest part of being Miss Louisville," recalls peppy, Toni, "was looking my best at all times. I could never tell when somebody might point to me and . . .