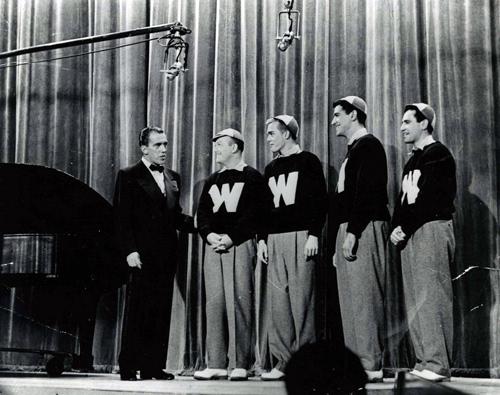 Toast of the Town

Paying the campus security guard $10 for access to Van Meter Auditorium, Vaughn, Sacca, Spiegelman and McGuire recorded Trying on a portable reel-to-reel tape recorder with the help of football player Bill Ploumis, who lay on the floor and lifted the piano pedal whenever it stuck. When local WLBJ deejay Bill Stamps played it on his evening radio program Whistling In The Dark, the listeners requested it 15 times.

As a former employee of Dot Records, Stamps convinced executive Randy Wood to listen to the record. Wood then brought a professional recording crew to Van Meter Auditorium where they worked for six hours to get the right take. Once captured, the flip side You Made Up My Mind was recorded in 30 minutes.

Trying was released May 25, 1952, but did not sell well at first. As Wood assembled The Hilltoppers to break the news that their musical career would be brief, a Cincinnati distributor called to request 1000 copies as soon as possible. On August 16th, Trying was on Billboard's charts!

The Hilltoppers now faced the difficult task of balancing college course work and sudden fame. While still students, they performed on eight nationally syndicated television programs and flew to countless weekend engagements in cities such as Chicago, Cleveland, Cincinnati, Boston, St. Louis, and New York. For three of the boys, the collegiate attire of beanies, letter sweaters, gray flannels and white bucks was more than just a gimmick; missing performances due to scheduled exams was a necessary part of their dual lives.