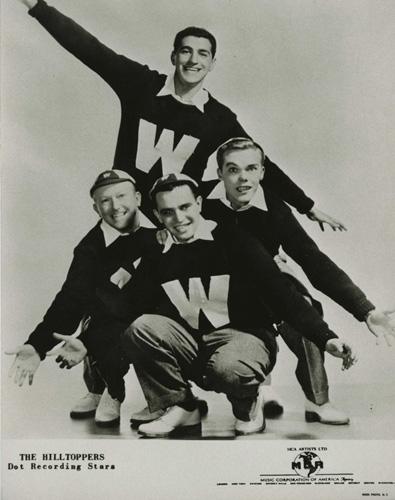 From 1953 to 1956, three different Hilltoppers replaced college coursework with military service as distraction from their musical careers. Drafted in March 1953, Jimmy Sacca served first at Fort Dix, New Jersey, and then overseas in Okinawa, Korea and Japan. Prior to Sacca's return to the United States, Seymour Spiegelman and Don McGuire began their years with the U. S. Army. Recognizing the need to keep the quartet before the public, Jimmy Sacca enlisted first Bob Gaye, Clive Dill and Eddie Crowe and later Lou Mastor, Karl Garvin and Eddie Crowe to tour as The Hilltoppers. The "originals" reunited in March 1957, minus Billy Vaughn whose hit Melody of Love had assured him a place as an orchestra composer and conductor. In December 1958, when Eddie Crowe left The Hilltoppers, they returned to their alma mater to recruit music major and trumpet player Doug Cordoza, Seymour's brother-in-law.

Throughout the 1950s, The Hilltoppers kept a teenage and college following but were also a big draw for popular nightclubs like the Casa Loma in St. Louis, the Castle Farms Ballroom in Cincinnati and the Emerald Room in Houston. Tours abroad to Great Britain (1956), Germany, France & England (1958) and the South Pacific (1959) brought them international recognition.