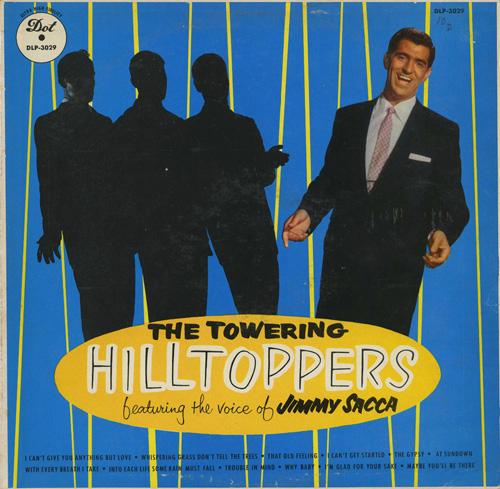 The Latest by the Greatest

In the late 1950s, The Hilltoppers expanded their repertoire of love ballads with the calypso hit "Marianne" and an original rhythm and blues number, "The Joker." Another style of music, however, was gaining national popularity. The November/December 1957 issue of Hilltoppers Topics included a round-table discussion of rock and roll, which Seymour found "unimaginative and repetitive." Their fans agreed: in an August 21, 1957 Kansas City Star article which described The Hilltoppers as "Singers of 'Melting' Ballads," the Kansas City and Independence fan club presidents were quoted as saying, " Pooooo . . . there's nobody in these clubs has any use for Elvis . . . In fact, Elvis Presley . . . phooey."

In addition to recording other styles of music, "the Hilltoppers broke in a new part of their act in Indianapolis recently . . . a clever vaudeville bit in which the foursome use straw hats and canes. Don does his part with 'If You Knew Suzie', Eddie sings 'Swannee', Seymour renders 'Won't You Come Home, Bill Bailey', and Jimmy comes in with 'Toot Toot Tootsie Goodbye.'"
~Hilltoppers Topics, Nov/Dec. 1957