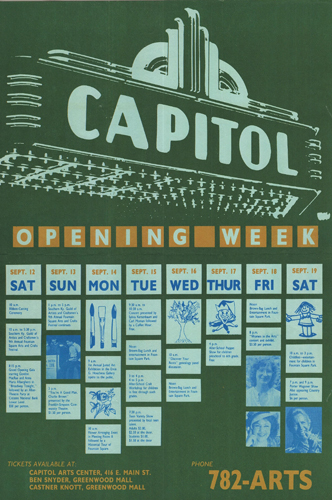 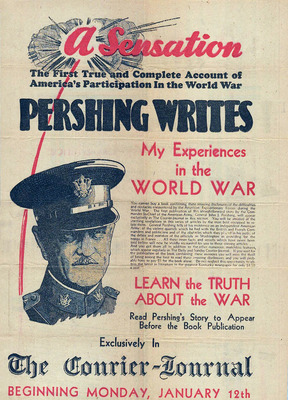 Poster advertising The Courier-Journal. One side promotes its accessibility for rural readers, and the other promotes its exclusive pre-publication coverage of General John J. Pershing's book on World War I. Advertisement reads:

You cannot buy a book containing these amazing disclosures of the difficulties and obstacles encountered by the American Expeditionary Forces during the World War. The first publication of this straightforward story by the Commander-in-Chief of the American Army, General John J. Pershing, will appear exclusively in The Courier-Journal in this section. You will be amazed at the startling revelations in this series of articles by the man best equipped to relate them. General Pershing tells of his insistence on an independent American Army; of the violent quarrels which he had with the British and French Commanders and politicians and of the obstacles which they placed in his path; of the delays and mistakes of the officials in Washington in providing for the troops in France . . . All these inner facts and secrets which have never been told before will now be vividly recounted for you in these stirring articles. . . . And you get them all in addition to the other numerous, matchless features which appear regularly in The Daily and Sunday Courier-Journal. If you wait for the publication of the book containing these memoirs you will miss the thrill of being among the first to read these amazing disclosures and you will probably have to pay $5 for the book alone. Do not neglect this opportunity to obtain the latest in literature in the greatest Kentucky newspaper for only $3.50 a year.

LEARN the TRUTH ABOUT the WAR

Read Pershing's Story to Appear Before the Book Publication