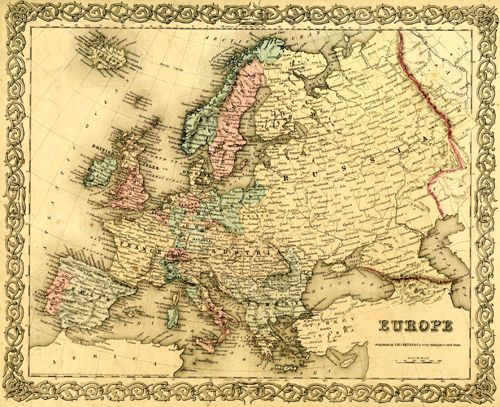 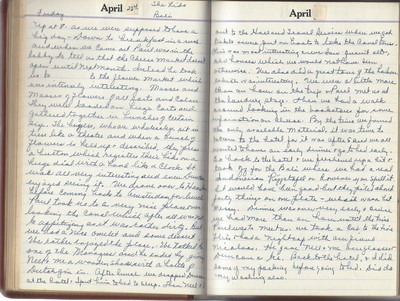 Up at 8 - as we were supposed to have a big day - Down to breakfast in a rush and when we came out Paul was in the lobby to tell us that the cheese market doesn't open until next month. instead he too us to _____ to the flower market which was intensely interesting. Masses and masses of flowers of all sorts and colors. They were loaded on huge carts and gathered together in bunches of certain size. The buyers, who are wholesalers, sit in tiers like a theatre and when a bunch of flowers is held up & described, they press a button which registers their bids on a huge dial with a hand like a clock. It was all very interesting and even Duncan [Hines] enjoyed seeing it. We drove over to Haarlem before coming back to Amsterdam for lunch. Paul took us to a very nice place overlooking the canal which after all was not to[o] appetizing as it was rather dirty. But we had a nice omelet and some dessert. We rather enjoyed the place. We talked to one of the Managers and he ended by giving Nell & me a wooden shoe with a bottle of Dutch gin in. After lunch we dropped Duncan at the hotel. I put him to bed to sleep. Then Nell & I [went] out to the Holland Travel Service where we got tickets & were put on boats to take the canal tours. This was most interesting as we saw quaint old old houses which we would not have seen otherwise. We also did a great tour of the harbour which was interesting. We were a little more than an hour on the trip & Paul met us at the landing stage. Then we had a walk around looking in the bookstores for some information on cheese. By the time we found the only available Material, it was time to return to the hotel for it was after 5 and we all wanted to have an early dinner & go to bed early. So back to the hotel & we freshened up a bit & took off for the Bali where we had a real Indonesian Rijjstafel [rijsttafel, a rice table] or however you spell it. It would have been good but they piled about forty things on one plate - which was a bit messy. Dinner was over very early & since we had more than an hour until the time Paul was to meet us, we took a cab to the Fire Flies & had a nightcap with our friend Nicholas. He gave Nell & me our glasses & Duncan a tie. Back to the hotel & I did some of my packing before going to bed. did do my washing also.