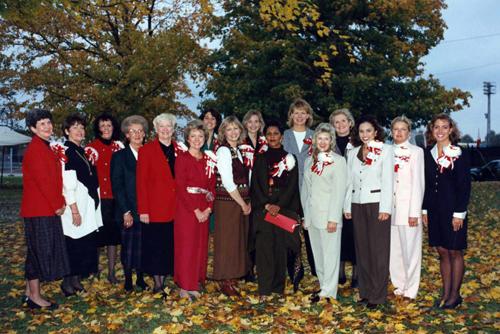 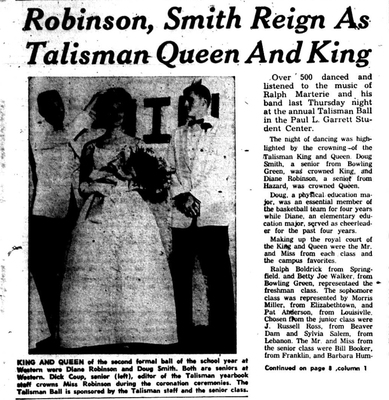 Article from the College Heights Herald describing the Talisman Ball:

Over 500 danced and listed to the music of Ralph Marterie and his band last Thursday night at the annual Talisman Ball in the Paul L. Garrett Student Center. The night of dancing was highlighted by the crowning of the Talisman King and Queen. Doug Smith, a senior from Bowling Green was crowned King, and Diane Robinson, a senior from Hazard was crowned Queen.

Making up the royal court of the King and Queen were the Mr. and Miss from each class and the campus favorites.

Ralph Boldrick from Springfield, and Betty Joe Walker, from Bowling Green, represented the freshman class. The sophomore class was represented by Morris Miller, from Elizabethtown, and Pat Anderson from Louisville. Chosen from the junior class were J. Russell Ross, from Beaver Dam and Sylvia Salem, from Lebanon. The Mr. and Miss from the senior class were Bill Booker, from Franklin and Barbara Humphries, from Bowling Green.

The master of ceremonies for the coronation was Coleman Shouse, senior from Sturgis, who is president of the senior class.