History of the Spanish American War Embracing a Complete Review of Our Relations With Spain by Henry Watterson (E715 .W342) 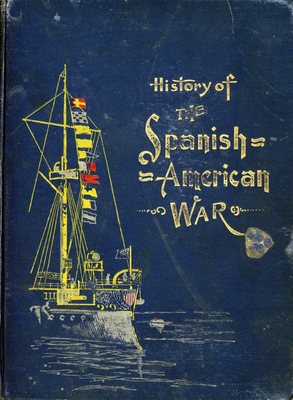 "History of the Spanish-American War Embracing a Complete Review of Our Relations with Spain" by Henry Watterson (Louisville: Courier-Journal Job Printing Co., 1898). Chapter titles include: The Causes and the Declaration of War, The Making of Armies and Navies, Dewey and Manila, The Blockade of Cuba, "Bottling Up" Cervera's Squadron, The Invasion of Cuba, Heroes of Las Guasimas, Closing In on Santiago, San Juan and El Caney, Destruction of Cervera's Squadron, Progress of Our Army and Navy, The Death Grip at Santiago, Surrender of Santiago, Garcia's Disaffection and Manzanillo, Significance of the Fall of Santiago, Defeat of Foreign Intervention, The Philippines Question, "Imperialism" - "Expansion" - Annexation, Anglo-American Alliance, Attitude of France and Russia, Dewey and the Germans, Dewey, Aguinaldo, and Augusti, The Invasion of Porto Rico, Peace, Assault and Capture of Manila, Fighting Leaders of the War, Fighting Leaders of the Army, Interesting Facts about War, Aspects and Incidents, The Peace Negotiations, and the Appendix. This book is available for use in Library Special Collections at WKU; 270-745-5082; spcol@wku.edu.