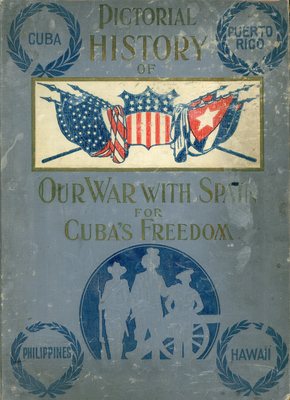 "Pictorial History of Our War With Spain for Cuba's Freedom" by Trumbull White (Place of publication not identified: Freedom Publishing Co., 1898). Chapter titles include: A War for Liberty and Humanity, How Columbus Found the "Pearl of the Antilles," Spain's Black Historical Record, Buccaneering in the Spanish Main, Commercial Development of Cuba, Beauties of a Tropical Island, Wealth from Nature's Store in the Forest and Fields of Cuba, The Cubans and How They Live, Havana, the Island Metropolis, The Cities of Cuba, Mutterings of Insurrection, Outbreak of the Ten Years' War, Massacre of the Virginius Officers and Crew, Operations of the Ten Years' War, The Peace of Zanjon and Its Violated Pledges, Preparations for Another Rebellion, The Cuban Junta and Its Work, Key West and the Cubans, Another Stroke for Freedom, Jose Marti and Other Cuban Heroes, Desperate Battles with Machete and Rifle, Filibusters From Florida, Weyler the Butcher, Cuba Under the Scourge, Fitzhugh Lee to the Front, Americans in Spanish Dungeons, Maceo Dead by Treachery, Weyler's Reconcentration Policy and Its Horrors, American Indignation Growing, Outrages on Americans in Cuba, McKinley Succeeds Cleveland, The Case of Evangelina Cisneros, Work of Clara Barton and the Red Cross, The Catastrophe to the Maine, Patience at the Vanishing Point, Events in the American Congress, President McKinley Acts, Strength of the Opposing Squadron and Armies, Battleships and Troops Begin to Move, Diplomatic Relations Terminate, First Guns and First Prizes of the War, Declaration of War, Call for the National Guard, Our Citizen Soldiery, Blockade of Cuban Ports, Spanish Dissensions at Home, The Philippines, Puerto Rico, and Other Colonies of Spain, Progress of Hostilities, Sea Fight off Manila, Americans Victorious, Hawaii, and Our Annexation Policy, Continued Success for American Soldiers and Sailors, The Invasion of Puerto Rico, The Surrender of Manila, Victorious Close of the War, and Personal Reminiscences. This book is available for use in Library Special Collections at WKU; 270-745-5083; spcol@wku.edu